Review: ‘My Sister, The Serial Killer’ by Oyinkan Braithwaite 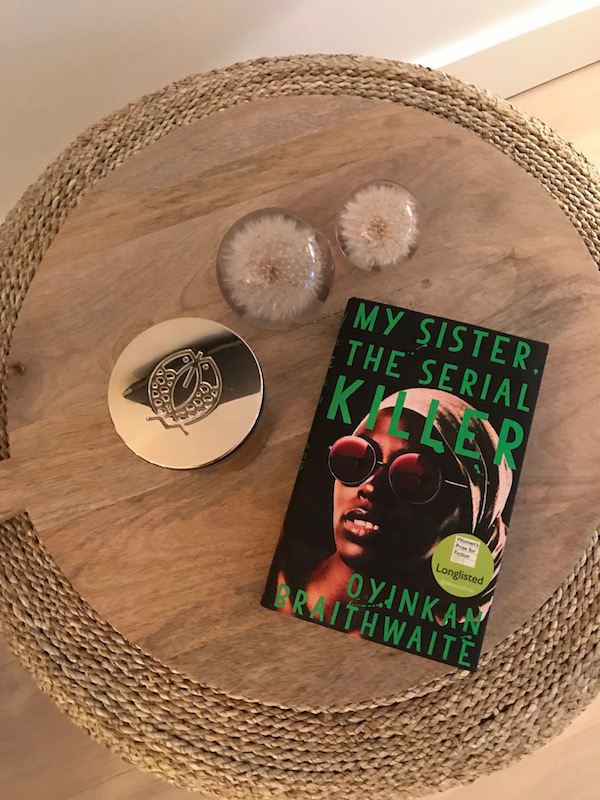 When I saw that Oyinkan Braithwaite’s novel ‘My Sister, The Serial Killer’ had been longlisted for the Women’s Prize for Fiction 2019, I bought a copy immediately. I can’t remember the last time I bought a book without at least glancing at the synopsis, but the title alone was enough to persuade me.

Braithwaite’s title gets to the point of the novel directly: murder. Like many people nowadays, I am instantly drawn in by a murder story, even more so by a serial killer narrative. Although this is a morbid kind of interest, it’s comforting to know that I am not alone. You only have to type the word ‘murder’ into the search box on Netflix to see how popular stories of serial killers are. Why we are involuntarily drawn to stories about one of the worst ways in which to die, and the psyche behind someone who inflicts that upon people, I’m yet to understand. But what I do know is that serial killers sell, and we are all eager to buy into it.

Aside from the compelling subject matter, I was also drawn in by the phrase ‘my sister’. There is something strange about willingly revealing a familial connection to a serial killer. It comes across as normal as saying ‘my sister, the lawyer’. To admit that her sister has murdered a string of people whilst simultaneously admitting that she is related to that person adds a layer of intrigue. Instantly, I knew that this story would be different from the wealth of serial killer narratives I have indulged in previously.

The most unique aspect of Braithwaite’s novel is its blurred moral compass. The novel is written from the perspective of Korede as she cleans up the mess her sister, Ayoola, makes. Ayoola is a young girl whose beauty and allure are akin to a mythological siren. Despite this, she is child-like, reckless and she goes through men faster than she can scroll through her Instagram page. Even though she is publicly associated with several men who have mysteriously gone missing, she still has suitors lining up for a chance to date her. Korede certainly does not condone Ayoola’s actions, but each murder only seems as severe as a child pocketing some sweets on the way out of a newsagents.

However, this overall feeling I had didn’t normalise anyone’s actions, but rather had the opposite effect: I felt overwhelmingly unnerved. Braithwaite takes teenage behavioural characteristics such as a social media obsession, shallowness, recklessness and impulsivity and places them on par with the archetypal psychotic serial killer that we expected from the title. Placing serial killer expectations on a girl who dances around her room singing ‘I Wanna Dance with Somebody’ while taking selfies is, to me, more terrifying than a figure in a dark alleyway. This is what makes her novel so brilliant.

‘I wonder where she keeps the knife. I never come across it, except in those moments when I am looking down at the bleeding body before me, and sometimes I don’t even see it then. For some reason, I cannot imagine her resorting to stabbing if that particular knife were not in her hand; almost as if it were the knife and not her that was doing the killing.’

Braithwaite achieves this effect by always showing the aftermath of the murder, not the murder itself. Our murder obsession is usually fuelled by a desire to find out the details of the incident. Withholding this information tricks the reader into underestimating Ayoola’s murderous capacity. We are never given a reason to hate Ayoola, and we can’t help but think everyone was overreacting in the first place.

Ayoola’s guilt is further blurred by an overarching romance plotline. Korede is more concerned about her sister stealing the man she has a crush on than she is about scrubbing blood off the bathroom floor. This builds on the theme of sister relationships throughout the novel. They protect each other under all circumstances, but as soon as a man comes into the picture, their loyalty dissipates. We may even go as far as to expect Korede and Ayoola to have more of an argument about one of them wearing the other’s clothes than an argument about Ayoola’s stabbings. This is another immature and unexpected characteristic against the backdrop of murder that works brilliantly.

Finally, Braithwaite sets her novel in Lagos, where the police are negligent and can be paid off. There is a moment of humour when a piece of evidence is found in one of the victim’s flats. This is not found from police investigation, but because a cleaner was sent in to clean the flat to rent it out. This lax attitude and Ayoola’s charm allows her to get away with murder, quite literally.

I finished the book with more questions than I had when I started it. My only criticism is that the book was not longer. Korede’s voice is so strong and full of character that I powered through the book in one sitting. Despite this, it is a brilliantly sharp novel of more twists and turns than Ayoola’s knife. It certainly deserves its longlisting.

How to Run an Effective Writing Workshop
January 14, 2022

Should Fiction Writers Use a Thesaurus?
November 15, 2021

Why Specificity is so Important
October 29, 2021